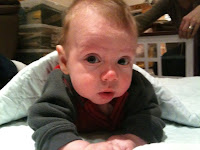 Some people were shocked when at two months old (he was born a month premature), I held my son only by his two hands and let him stand up on his own. Yes, his head was a bit wobbly and it took a lot of energy for him, but I let him do it.

One principle that I am going to continue to keep as I raise my son (and my possible future children – daughters as well) is to treat him older than he is, especially older than our culture think he should be.
So far this has meant letting him hold his head up on his own at two months old. There are a few other things that I think will be true in the near future:
Have you thought about this principle? Do you think I’m wrong or maybe idealistic? I’d love to hear your thoughts!

2 Replies to “Raising a Boy to Become a Man”